Pro-life Coalition Thanks Grassley for Standing Strong on #NoHearingsNoVotes 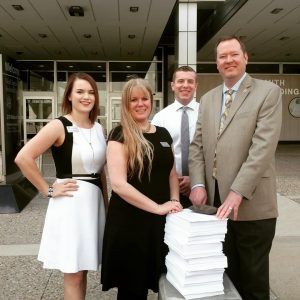 Washington, D.C.? ? This morning representatives from Concerned Women for America, Iowa Right to Life, and Susan B. Anthony List delivered nearly 4,000 petitions from Iowa pro-life activists to Senator Chuck Grassley?s Des Moines office,urging him to maintain his strong resolve to let the people have a say in the Supreme Court vacancy following Justice Scalia?s death. The groups released the following joint statement ahead of delivering the petitions to Sen. Grassley?s office:

?Despite sustained and organized campaigns by the abortion lobby, Senator Grassley has been unwavering in his commitment to ensure the American people have a say in who fills this court vacancy. President Obama should not have the chance to stack the court with another pro-abortion Justice. We commend Senator Grassley for his courageous stand. Our members in Iowa and across the country stand by him and are proud to support him.?

Pro-life groups have mobilized their grassroots at www.ProtectTheCourt.com where activists can send an immediate message to their U.S. Senators.

The Susan B. Anthony List and its Political Action Committees, the SBA List Candidate Fund and Women Speak Out PAC, spent $16.71 million in the 2014 election cycle to defeat pro-abortion incumbents and elect pro-life candidates to federal and statewide office. The SBA List is dedicated to pursuing policies and electing candidates who will reduce and ultimately end abortion. To that end, the SBA List emphasizes the education, promotion, mobilization, and election of pro-life women. ?The SBA List is a network of more than 465,000 pro-life Americans nationwide.