An Iowa Rally to END Trafficking of Dead Baby Parts and EXPOSE the abortion industry! 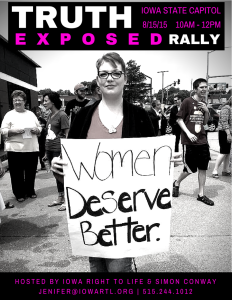 By now you have likely heard of the?6 videos that have been released, highlighting Planned Parenthood harvesting and selling unborn baby parts. If needed, here are links to the?already-released videos: https://www.youtube.com/user/centerformedprogress.

As one response to this horrific uncovering, Iowa Right to Life is partnering with Simon Conway of WHO Radio 1040AM and coordinating a huge rally in protest of these atrocities.

The Rally will be held Saturday, August 15, from 10:00am-12:00pm on the Iowa State Capitol grounds. Invited speakers include ALL presidential candidates from both parties, as well as Iowa?s Governor and Lt. Governor and Iowa’s Federal Representatives, in Congress and Senate.